70 creative writing promptsPerhaps it’s inevitable that photographing pets and their people became a big part of my life, because there are pictures of me (with various pets and rescue projects) going ALL the way back to early childhood.  The first furry companion I remember being part of our lives was a Cockapoo (cocker spaniel and poodle mix) named Scooter.  Whether it was just a cute name or one bestowed upon him due to his habit of doing mad circles around the house, he was a sweet, energetic dog.  That’s me in our backyard in Lexington, SC, hanging out laundry under the watchful eye of the pup.  And no, I am not sure what year this was.  (Dates are not being mentioned for the protection of the aging!)

When we moved to Chattanooga, TN it was to a house with no fenced yard, so Scooter stayed in South Carolina with friends from our church.  We were sad to leave him, but at the last moment an extra passenger was added to the cab of the moving van in the form of an adorable grey and white kitten abandoned in the yard of our neighbors.  The family already had as many cats as they could handle, so little Pepper hitched a ride with us.  Unfortunately he was only with us a few months before meeting an untimely end in the road in front of our house, and after that Dad said no more pets for a while.  Thus began the begging years:  as in, my sister and I constantly and unrelentingly begging for a pet.

It took another fouhow to do a creative writingr years or so, but we finally wore them down.  For my twelfth birthday I was in for a surprise when a neighbor arrived wearing heavy gardening gloves and carrying a box.  When the lid came off we were treated to the memorable sight of two fat orange tabby kittens, backed into a corner of the box, hissing and spitting with all their might.  They were wild and has been abandoned by the mother cat in the neighbor’s basement.  After a lengthy discussion with my girlfriends who were over for the birthday sleepover, the fluffiest kitty was chosen and dubbed Peanut Butter Fluffball Parker.  We then proceeded to stay up all night, strictly against parental orders, and essentially petted and coddled him into domestication practically overnight (even if we had to find him and drag him out from hiding places to do so).  He went by Fluff, for short, and one of his favorite places to nap was next to my bed, with the Garfield slippers and next to the Barbie townhouse.

Fluff was with us for a long time, and by the time he passed I was in college and working at the local pet store.  Nothing could have been less ideal for my longsuffering parents, since I had already shown a propensity for rescuing animals in need.  There were the black and white kittens who took refuge in the crawl space, the puppies chained up in a neighbor’s back yard I constantly fed, and the mangy West Highland terrier name Scruffy we took and eventually homed with my mother’s hairdresser.  From the pet shop I brought home kittens needing to be bottle fed, hamsters named Buffy and Perceval, and assorted others in need.

It wasn’t until we relocated to the Atlanta area that another permanent addition would come along. 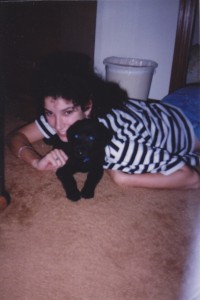 Finally being back in a house with a fenced yard, I got permission from the parents to have a look at the local shelter for a dog.  Walking up and down row after row of kennels, I was so overwhelmed and heartsick at the number of dogs in need, and the condition some were in, that I left in tears.  Coming back for a second visit, with my sister in tow, we  spotted two puppies side by side.  One was a pointer mix with charming brown dappled fur, the other a black lab with big brown eyes.  Although I was leaning toward the pointer, my sister lobbied hard for the lab, and a week later I drove home with a stinky, wiggly black furball in my lap.  We named him Lucas, and he was a cherished and integral part of our family until he passed away at the ripe old age of 17.  It’s been a few years since we said goodbye to our old boy, so the pain is still there, but we enjoyed such an unexpectedly long life that we can’t complain.  The next chapter of my personal journey with pets is yet to be written, but for now I thoroughly enjoy admiring (petting, rubbing, and cuddling) those I meet out and about, and of course the wonderful clients who I’m privileged to work with.