Best way to spend a gorgeous spring day in Atlanta?? By getting a girl and her Pitbull all dolled up and heading outside for some glamour photos, of course!! Blue and Brianna have a very special connection that was obvious from the minute I met them. I could not say it any better than Brianna did, so here is their story in her own words:

“I met Blue the day after she was found wandering the streets and arrived at Homeless Pet Foundation in August of 2013. I was the one who recognized that the nasty symptoms she was experiencing were an indicator of serious illness, and rushed her to the vet. It took all the technicians working on her daily to help her recover. Right from the start I wanted to adopt her, and made a point to spend time with her as often as possible. Very quickly the staccato rhythm of her tail wagging and hitting the side of the kennel as I approached communicated her feelings: I was in love, and the feeling was mutual! I told Homeless Pets I would foster her as soon as my mom was back in town from her job. But during that wait, Blue was adopted out. I was heart broken but happy she found her “forever” home.

A week later, I come in to work and there was Blue! The adopter had returned Blue, saying that she “didn’t like the breed.” Blue came home with me that night, quickly won over my family, and I formally adopted her. Then, only a few months later, her abdomen started filling with liquid. Countless draining, blood draws, ultrasounds and over $1,300 later, I was informed that she has a liver shunt and that she had about a year to live. That was in April of 2014. We put her on two medications and a prescription food and she reacted well within 24 hours. She is still on these medications and food and she is doing amazing!

Between the medications, the tests, one surgery and the prescription foods, Blue has cost me over $2,000. Money saved for a trip to Europe instead paid for Blue’s treatment. I knew if I only had a year with her, I didn’t want to spend any time apart. Even after foregoing the trip there was still a lot to pay off, but I kept working and it is now all paid. Blue is the most special person(dog) in my life. She goes and visits people with me and loves EVERYONE. Despite her tough past she is gentle and friendly with everyone she meets.”

This session was an absolute blast.  Color scheme inspired by the furry girl’s name, of course, plus Brianna’s love of the color and Blue’s harness.  Teal blue pettiskirt, black corset and tank top, black ribbon headbands on Bri and Blue, plus mini doggie tutu, all belonging to the Glamour Closet at the studio.  Feather earrings, sunglasses, and awesome shoes Brianna’s own.  Photographed in Smyrna, GA near the Community Center and Library and Smyrna Market Village shops. 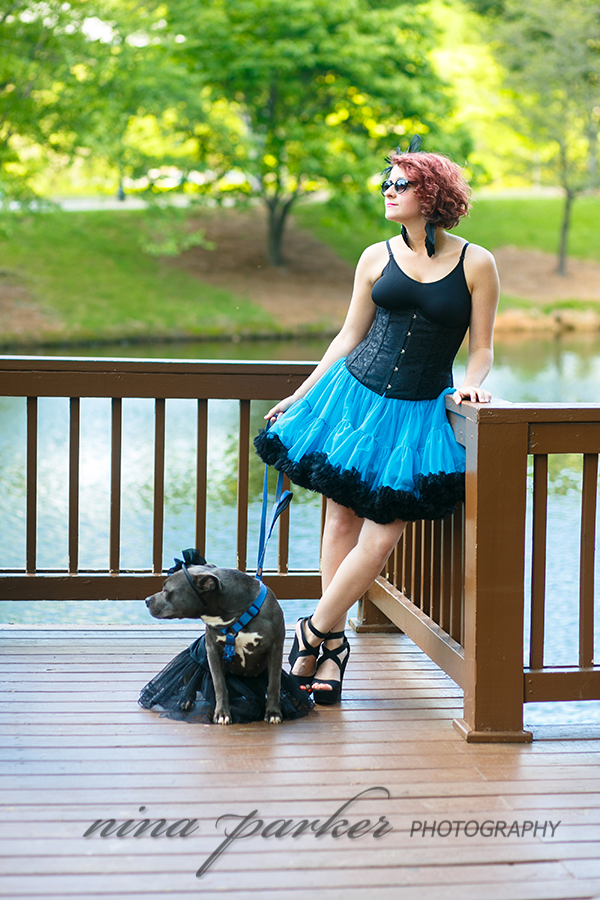 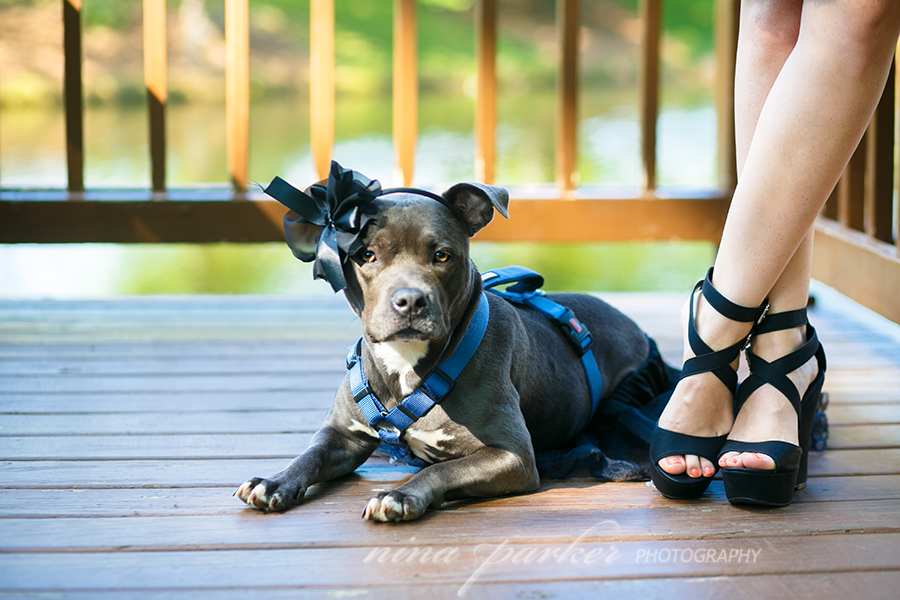 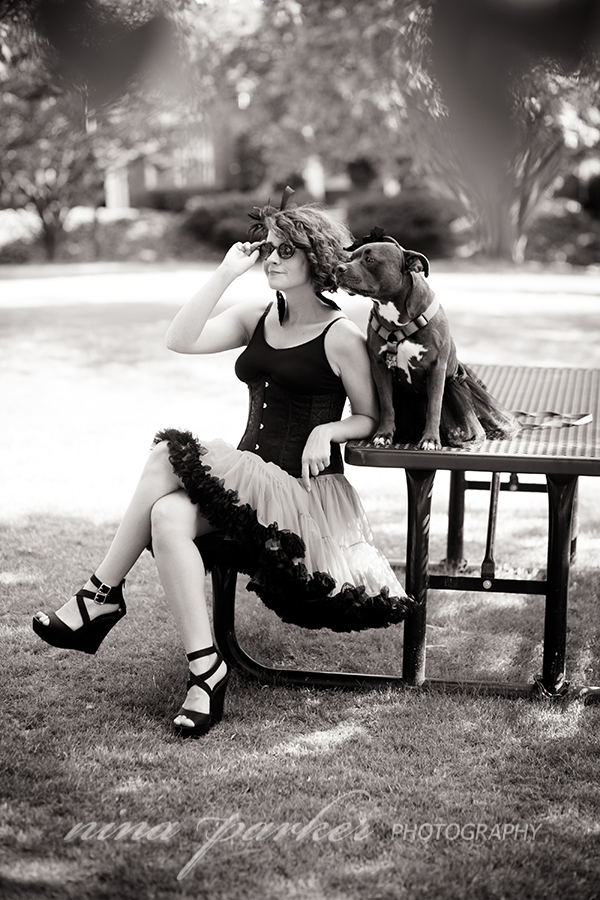 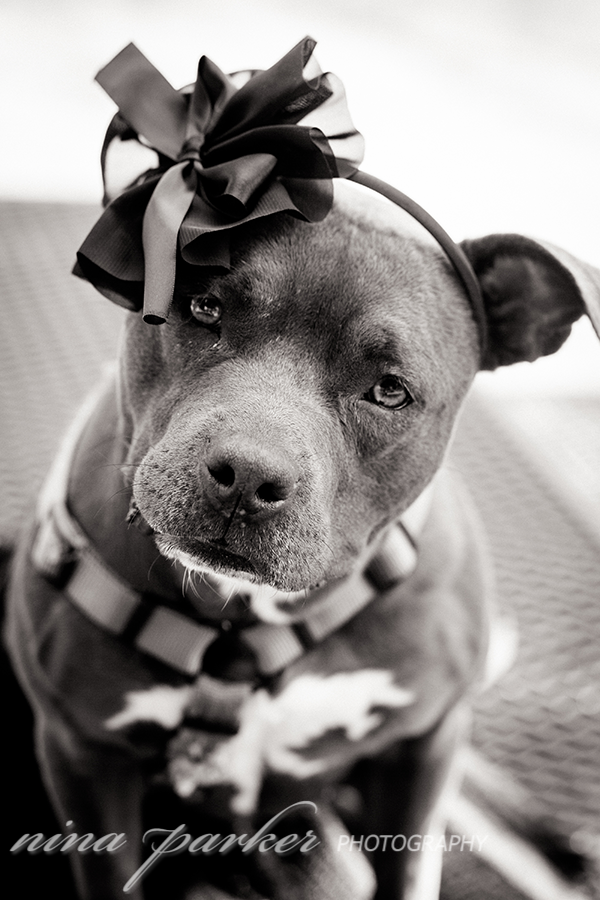 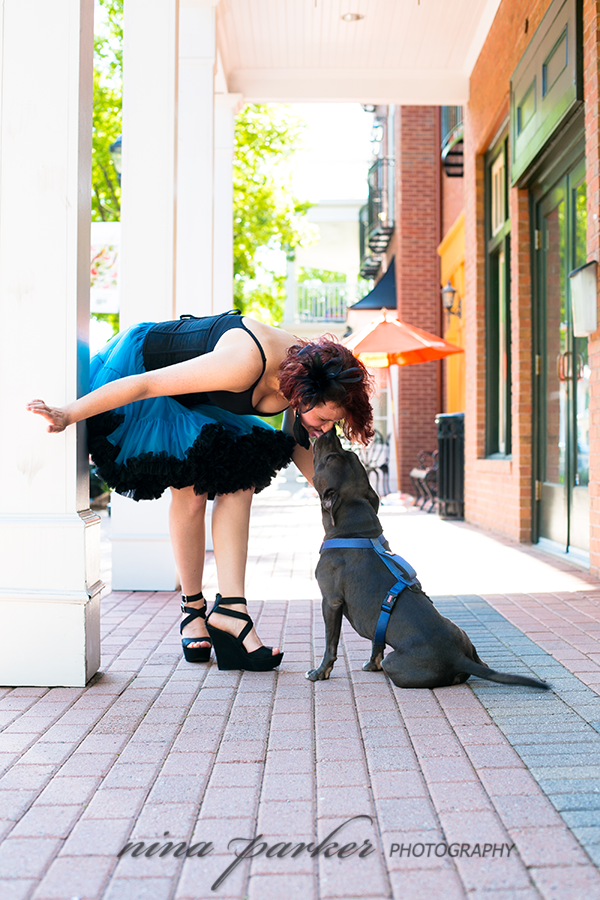 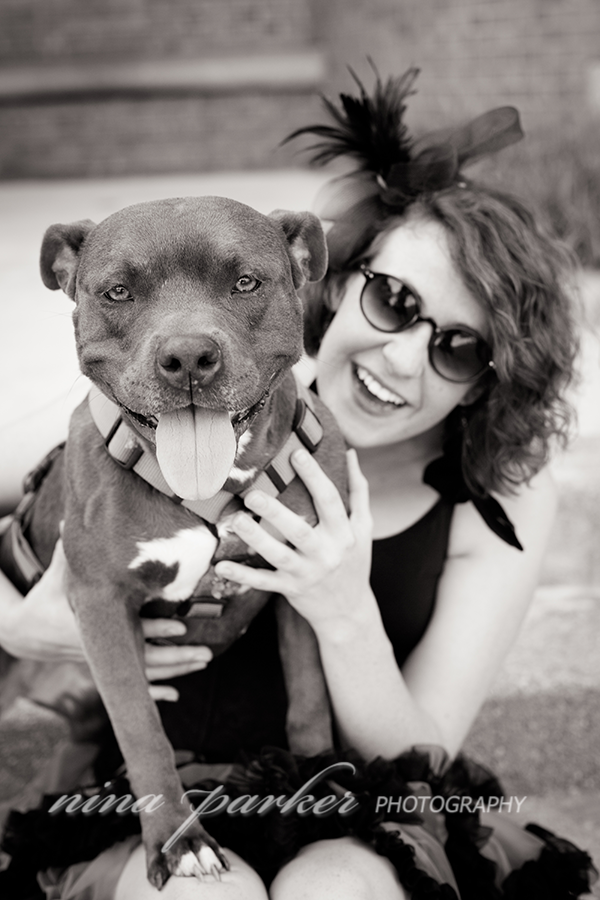